Utrogestan capsules contain the active ingredient progesterone, which is a naturally occurring female sex hormone. It is used as part of hormone replacement therapy in women who have not had a hysterectomy.

What are Utrogestan capsules used for?

Utrogestan capsules are taken as part of hormone replacement therapy (HRT) for the menopause in women who have not had a hysterectomy and are taking an oestrogen hormone supplement. Utrogestan opposes the effect of the oestrogen on the womb lining and reduces the risk of endometrial cancer.

How do Utrogestan capsules work?

Utrogestan capsules contain the active ingredient progesterone, which is a naturally occurring female sex hormone. It is used as part of hormone replacement therapy in women who have not had a hysterectomy.

Women’s ovaries gradually produce less and less oestrogen in the period up to the menopause, and oestrogen blood levels decline as a result. The declining levels of oestrogen can cause distressing symptoms, such as irregular periods, hot flushes, night sweats, mood swings and vaginal dryness or itching.

Oestrogen can be given as a supplement to replace the falling levels in the body and help reduce these distressing symptoms of the menopause. This is known as hormone replacement therapy (HRT). HRT is usually only required for short-term relief from menopausal symptoms and its use should be reviewed at least once a year with your doctor.

Utrogestan capsules are taken as part of each monthly oestrogen cycle to cause the womb lining to be shed as a monthly bleed, like a period. This reduces the risk of endometrial cancer, though it does not eliminate this risk entirely. This is known as combined HRT.

How do I take Utrogestan capsules?

An oestrogen supplement is taken on a continuous daily basis for HRT. Utrogestan tablets are then taken in one of two ways each month, as described below, to oppose the effect of the oestrogen on the womb lining. Follow the instructions given by your doctor.
Either two 100mg Utrogestan capsules should be taken once daily at bedtime for 12 days in the latter part of each 28 day cycle, ie from day 15 to day 26. This usually results in a withdrawal bleed (similar to a period) the following week.
Alternatively, one 100mg Utrogestan capsule can be taken once daily at bedtime on days 1 to 25 of each 28 day cycle. This usually causes less withdrawal bleeding.
Utrogestan capsules should be swallowed whole with a drink of water. They should be taken without food on an empty stomach.
If you forget to take a dose take it as soon as you remember, unless it is nearly time for your next dose. In this case just leave out the missed dose and take your next dose as usual when it is due. Do not take a double dose to make up for a missed dose.

Utrogestan capsules should be used with caution by

Utrogestan capsules should not be used by

This medicine should not be used if you are allergic to one or any of its ingredients. Please inform your doctor or pharmacist if you have previously experienced such an allergy.

If you feel you have experienced an allergic reaction, stop using this medicine and inform your doctor or pharmacist immediately.

Possible side effects of Utrogestan capsules

Medicines and their possible side effects can affect individual people in different ways. The following are some of the side effects that are known to be associated with this medicine. Just because a side effect is stated here does not mean that all people using this medicine will experience that or any side effect.

Sleepiness.
Dizziness.
Breast tenderness.
Change in menstrual bleeding, such as menstrual spotting or breakthrough bleeding.
Disturbances of the gut, such as upset stomach, bloating.
Skin reactions, such as rashes, itching and acne.
Hair loss (alopecia).
Excessive hair growth on the face and body (hirsutism).
Irregular brown patches on the skin, usually of the face (chloasma). If you experience this you should minimise your exposure to the sun or UV light while taking this medicine.
Retention of water in the body tissues (fluid retention).
Changes in weight.
Change in sex drive.
Pre-menstrual symptoms.
Depression.
Blood clots in the blood vessels (eg, DVT, pulmonary embolism, heart attack, stroke – see warnings above). 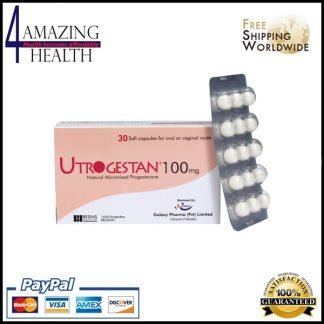 You're viewing: Utrogestan 100mg $38.00
Add to cart
Brought to you by WisdmLabs: WordPress Development Experts