Emergency contraception is the contraception method that you can use in emergency, after sex to prevent pregnancy. Actually mostly it means the “after sex pill” (also called the morning after pill, the day after pill) like POSTINOR.

The most common method of emergency contraception is a special contraceptive pill, as MADONNA within 72 hours.
The „morning after” pill is similar to the regular contraceptive pills, containing the same active hormone compound. They can be used in the following typical cases:

You are unsure about „withdrawal (pull-out) and/or calendar method”
Your regular birth control failed (condom broke or slipped)
You made some mistake with your regular method (e.g. forgot to take birth control pills)
You didn’t use any birth control method before sex
You’ve been taking some other medication that may have reduced the effectiveness of your regular Pill and you’re worried about getting pregnant

Emergency contraceptive pills like MADONNA are effective to prevent pregnancy when taken as directed up to 72 hours (3 days) after unprotected sex.
Containing only one kind of hormone called Levonorgestrel, MADONNA prevents pregnancy before it is established. If you take MADONNA it is 99% sure that you avoid pregnancy*.
MADONNA were used in more than 400 million cases without any serious adverse event.
Safety of MADONNA is also shown by the fact that it is easily available in pharmacies for women all around the world. 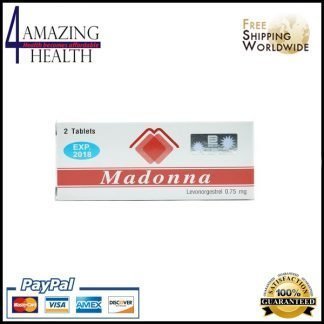