DESCRIPTION:
It occurs as a pink round bi-convex tablet with a diameter 6.5 mm. engraved “S” script on one side and the other side is smooth.

ACTIONS AND MODE OR MECHANISMS OF ACTION:
Metabolic and Somatic Effects: Estrogens are responsible for the development and maintenance of the female reproductive system and secondary sex characteristics. Estrogens cause growth and development of the vagina, uterus and fallopian tubes, and the enlargement of the breasts. Indirectly, estrogens contribute to the shaping of the skeleton, maintenance of tone and elasticity of urogenital structures, cause changes in the epiphyses of the long bones producing pubertal growth spurt and termination, axillary and pubic hair growth, and pigmentation of the nipples and genitals. In prolonged estrogen deficiency states, the administration of estrogens may alter associated degenerative bone changes.

Effect on Menstruation: An ebb and rise of the female gonadal hormone produces the normal menstrual cycle. Indirect effect of estrogen to induce ovulation is produced by negative feedback at Hypothalamus and Pituitary gland which increases LH levels and induce ovulation. Estrogen levels rise during the first half of the menstrual cycle. At midpoint in the second half of the cycle, the corpus luteum produces high levels of both estrogens and progesterone. Decline of estrogenic activity at the end of the menstrual cycle commonly brings on menstruation, although the cessation of progesterone secretion is the most important factor in this phase of the mature ovulatory cycle.

Effects on Nervous System: Estrogens also affect the psychologic and emotional aspects of feminine behavior. As estrogen levels increase during the menstrual cycle, women experience a sense of well-being and vigor. In the postmenopausal period, after the decline of endogenous estrogen production, estrogen administration aids in relieving nervous symptoms, such as anxiety, depression and irritability.

PHARMACOLOGY (SUMMARY OF PHARMACODYNAMICS AND PHARMACOKINETICS):
The pharmacological effects of conjugated are similar to those of endogenous estrogens. They are soluble in water and are well absorbed from the gastrointestinal tract. In responsive tissues (female genital organs, breasts, hypothalamus, pituitary) estrogens enter the cell and are transported into the nucleus. As a result of estrogen action, specific RNA and protein synthesis occurs. Metabolism and inactivation occur primarily in the liver. Some estrogens are excreted into the bile: however, they are reabsorbed from the intestine and returned to the liver through the portal venous system. Water-soluble estrogen conjugates are strongly acidic and ionized in body fluid, which favor excretion through the kidneys since tubular reabsorption is minimal.

INDICATIONS:
1. Relief of menopausal and postmenopausal symptoms occurring in naturally or surgically induced estrogen deficiency states including vulvar and vaginal atrophy.
2. Prevention and treatment of osteoporosis in naturally occurring or surgically induced estrogen-deficiency states. This is in addition to other important therapeutic measures eg. adequate diet and regular exercise. When prescribing solely for the prevention of postmenopausal osteoporosis, therapy should only be considered to be appropriate.
3. Hypoestrogenism due to hypogonadism, castration or primary ovarian failure.
4. Atrophic vaginitis.
5. Vulvar atrophy (with or without pruritis).

CONTRAINDICATIONS:
Estrogen should not be used in women (or man) with any of the following conditions:
1. Known or suspected pregnancy. Estrogen may cause fetal harm when administered to a pregnant woman.
2. Known or suspected cancer of the breast except in appropriately selected patients being treated for metastatic disease.
3. Known or suspected Estrogen-dependent neoplasia.
4. Undiagnosed abnormal genital bleeding.
5. Active thrombophlebitis or thromboembolic disorders.
However, there is insufficient information regarding women who have had previous thromboembolic disease. Estrogen should not be used in patients hypersensitive to their ingredients.

PRECUATIONS AND WARNINGS:
Precautions:
1. Contraindications:
a. Estrogen-dependent neoplasia.
b. Active thrombophlebitis or thromboembolic disorders.
c. Hypersensitive to Estrogen.
2. With exercise caution
a. Liver dysfunction.
b. Uterine fibromymata.
c. Heart or kidney dysfunction.
d. Diabetes mellitus.
Warning:
a. If changes in vaginal bleeding pattern and abnormal withdrawal bleeding or flow have occurred, discontinue this drug.
b. Some studies have suggested long-term continuous administration of natural and synthetic estrogens in menopausal women increase the risk of endometriosis. Close clinical surveillance is necessary, including endometrial sampling and malignancy sampling.
c. Long-term continuous administration of estrogens increases the frequency of liver carcinoma. Liver function tests should be made periodically.
d. Long-term continuous administration of estrogens increases the danger of thrombophlebitis.
e. Estrogens should not be used during pregnancy. 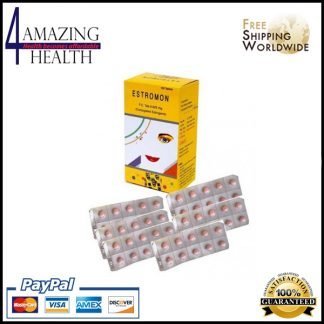 You're viewing: Estromon $32.80
Add to cart
Brought to you by WisdmLabs: WordPress Development Experts